An excerpt from an OUPblog quiz published 30th July 2018: 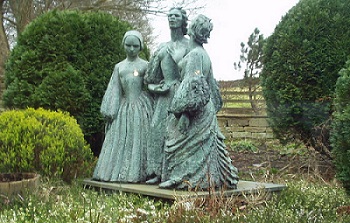 "Emily Brontë, born 200 years ago on 30 July 1818, would become part of one of the most important literary trinities alongside her sisters, Charlotte and Anne. Emily’s only novel, Wuthering Heights, polarised contemporary critics and defied Victorian convention by depicting characters from “low and rustic life.” Jane Eyre, written by the eldest Brontë sister, Charlotte, was initially condemned as being “pre-eminently an anti-Christian composition,” however, the text caught the attention of readers and the fusion between romance and realism is hailed as Charlotte’s major contribution to the form of the novel. The youngest Brontë sibling Anne’s novel Agnes Grey is viewed as an effective exposure of the threat to woman’s integrity and independence posed by a corrupt and materialistic society. At the time, though praised for its minute observation, the novel was criticized for its concern with the eccentric and unpleasant.

Each Brontë sister has contributed some of the greatest works in literary history. Their words have influenced writers and readers over many generations and have offered meditations on love, beauty, and self-determination—but can you guess which Brontë sister said what?"

Take the quiz on the OUPblog >