An excerpt from an OUPblog article published 8th March 2019: 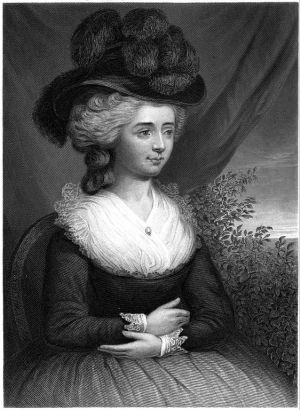 "Born in 1752, Frances Burney (better known as Fanny Burney) was well known as a satirical novelist in her time, anonymously publishing her first book, Evelina, in 1778. Despite her literary influence, Fanny Burney is a name unknown to many aside from the most ardent scholars. Did you know, for instance, that the title of Jane Austen’s Pride and Prejudice comes from the pages of Burney’s Cecilia?

In the eighteenth century, female authors were uncommon due (in part) to social expectations for proper female behaviour. Fanny herself experienced this pressure. Although she wrote her first novel – The History of Caroline Evelyn – at the age of ten, Burney later destroyed the work in a bonfire. It is likely she did this due to the disapproval of her father. Thankfully, Burney’s tenacity (and cunning) won out in the end when she submitted the manuscript for Evelina to a publisher via her brother. The novel was a huge success, generating conversation for many months following its publication as well as receiving praise from Samuel Johnson, leaving London booksellers unable to keep up with demand..."

In celebration of Women's History Month, we have identified three events in this remarkable woman's life as told through her letters and journals.

Read more on the OUPblog>