The attractions of Oxford Scholarly Editions Online (OSEO) to researchers will be obvious: access to OUP’s unrivalled catalogue of scholarly editions from 1888 to the present and a robust search engine permitting multiple kinds of searches both within and among works. Its attractions to undergraduates and their instructors may be less obvious, but they are no less real. Here I shall mention three possible pedagogical uses. We should like very much to hear how other users are incorporating the site into their undergraduate teaching, or plan to do so.

First, OSEO texts provide a common point of reference. Many instructors will have experienced the frustration of trying to discuss a particular passage of a text when the students bring different editions to class—or none at all. Students may be unwilling to buy a recommended print edition when cheaper alternatives can be easily located online or free versions of the assigned texts can be downloaded. When the texts students have in front of them have been edited to different standards or according to different principles or (as is often the case with texts freely available on the web) not at all, when some have been annotated and others not, the students’ experiences of those texts will also differ accordingly, potentially disadvantaging those who do not have the prescribed edition.

For example, the student who analyses Andrew Marvell’s “To His Coy Mistress” from a text in which line 44 reads “Thorough the Iron grates of Life” may be perplexed when the instructor refers instead to “the Iron gates of Life.” The difference of one letter subtly changes the sense of the phrase, but both “gates” and “grates” are attested in the textual authorities used by modern editors of Marvell’s poems (the former in the printed Miscellaneous Poems of 1681, the latter in a manuscript held in Oxford’s Bodleian Library). One currently available paperback edition of Marvell’s poems prints “gate”, another “grate”. The advantage of the critical edition available in OSEO is that it not only provides the students with a uniform reading—in this case, “gates”—but it also notifies them, through the parallel notes in the adjacent frame, of the alternative reading and its source (see a screen shot below or read the poem on OSEO). Thus readers are given the option of raising the crux for discussion, which they would not be if the editor had silently chosen one or the other. 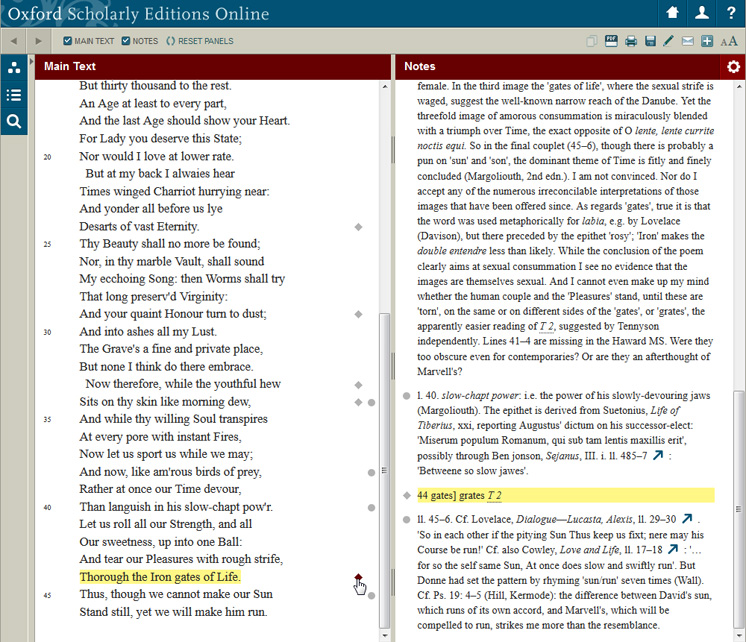 Shakespeare, notoriously, affords many examples of such cruxes, and how editors resolve them can affect significantly our interpretations of the works. Here are two cruxes suggested by my colleague Prof. Tiffany Stern. First, in Act 5, scene 2, lines 345–7 of Othello, the Moor asks Lodovico to recall him to the Venetian authorities as “one whose hand, | Like the base _______, threw a pearl away | Richer than all his tribe”. What word is supposed to fill the blank? According to the First Folio (1623, F1), it is “Iudean” (i.e. Judean); according to the first quarto edition (Q1) of 1622 (the first published version of the play), it is “Indian”. As with the “Coy Mistress”, both readings have their defenders among Shakespearean editors. But it is not difficult to imagine the confusion that might arise when one student, using an edition with the F1 reading, argues that Othello is comparing himself with Judas Iscariot, while another, using an edition with the Q1 reading, refers to seventeenth-century English stereotypes of Indians. The “preferred” or default edition in OSEO, Michael Neill’s Othello volume in the Oxford Shakespeare series, addresses this crux fully: while the text follows Q1, the textual note includes the F1 reading, and the editorial commentary directs us to an Appendix (hyperlinked to the commentary in situ) in which Neill summarizes the arguments advanced in favour of either reading and explains his own choice (discover this extract on OSEO).

The second Shakespearean example appears in Henry V. It is famous among scholars, but undergraduates relatively or entirely new to Shakespeare can hardly be expected to be aware of it. An undergraduate might well do a Google search for “Shakespeare Henry V” to find a text. I tried this and clicked through to the first complete text I found. In Act 2, scene 3, of this text (which lacks line numbers), the Hostess describes Falstaff on his deathbed: “his nose was as sharp as a pen, and a’ babbled of green fields.” What this unannotated text does not reveal is that the phrase as we know it now does not appear as such in the First Folio, but is instead an emendation by Shakespeare’s eighteenth-century editor Lewis Theobald, who was unable to make sense of what the Folio did print: “a Table of greene fields”. (The designation of the scenes of Act 3, absent in the Folio, was also an eighteenth-century innovation—by Theobald’s antagonist Alexander Pope.) Since the eighteenth century arguments have been advanced in favour of retaining the Folio reading, accepting Theobald’s emendation, or substituting “talk’d” or “talked” for “Table”. Here too OSEO—in which the default is Gary Taylor’s individual edition of Henry V in the Oxford Shakespeare series—not only makes the alternative readings immediately visible, but links the reader to Taylor’s detailed consideration of the crux and his defence of Theobald’s conjecture. Students may address or ignore this crux as they choose, but only because they have been given the option in the first place.

The remaining pedagogical uses of OSEO to which I shall call attention apply particularly well to early modern literature because it is so extensively represented in scholarly editions published by OUP. By making available digital editions that are otherwise unavailable or difficult to access in many, especially smaller, college and university libraries, OSEO offers instructors a means of expanding, redefining, or individualizing the pedagogical canon, which at present is largely determined (at least in North America) by a small number of popular anthologies. Using OSEO as a source of texts, someone teaching Renaissance drama would not be limited to Marlowe, Shakespeare, and Jonson (although all three are represented in their entirety in OSEO, each in more than one edition), but could also choose from Greene, Kyd, Lyly, Massinger, Middleton, and Suckling. Someone teaching seventeenth-century poetry would not be limited to Donne, Herbert, Milton, and Marvell (although they too are all available on the site), but would have equally ready access to Samuel Butler, Campion, Carew, Cowley, Crashaw, Davenant, King, Lovelace, Oldham, Prior, Rochester, Thomas Stanley, Suckling, Traherne, Henry Vaughan, and the various poets gathered in the three volumes of Minor Poets of the Caroline Period, not to mention such translations as Fairfax’s Tasso, Harrington’s Ariosto, and Lucy Hutchinson’s Lucretius. Teachers of philosophy and intellectual history, too, could assign texts from the magnificent ongoing Oxford Francis Bacon and Clarendon Editions of Hobbes and Locke (with the Clarendon Hume to be added in the next year or so). Precisely the fact that works on the site are equally present—in contrast to the world of printed books, where Kyd is much harder to find than Shakespeare—and searchable—not only by but independently of author—opens avenues for defamiliarizing literary periods and reconfiguring received groupings of authors and works. As further chronological tranches are uploaded to OSEO, the opportunities for cross-period comparison will increase accordingly.

At the beginning of this blog entry I referred to OSEO’s robust search engine. One of the chief benefits conferred by the digitization of printed scholarly editions is to facilitate searches within and among works, and thereby support informed comparative analysis. Had one books enough and time, one could, of course, search the printed Oxford editions for, say, poems published between 1550 and 1650 and calling themselves elegies; but the same search can be performed on OSEO in seconds, and without access to the printed volumes. The flexibility of the search engine permits instructors to devise assignments that encourage students to think outside the anthology, comparing different examples of a given genre, say, or comparing different uses of a word by a given author or across genres. If one, for instance, wanted to compare how ghosts are presented in plays and lyric poems—but not in prose writings—composed between 1600 and 1620, one could search the term “ghost” while narrowing the searched fields to drama and poetry within the chosen chronological range. Search engines are often regarded, and not without reason, as the enemies of reading; but OSEO’s search engine, with its multiple definitional functions and points of entry, can be used creatively by instructors precisely to encourage reading in unfamiliar works and in unaccustomed ways.

Are you interested in using OSEO? Go straight in to some selected works, or watch our new how to videos. If you don't have a subscription find out how to subscribe.