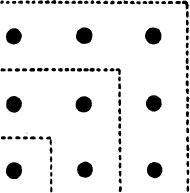 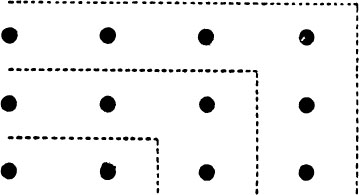 Fig. 2.
i.e. to the fact that 2 + 4 + 6 + … 2 n = n (n + 1), i.e. gives rise to a series of rectangular figures differing in the proportions of their adjacent sides, but gradually approaching to squareness. Prof. Taylor, in C.R. xl (1926). 150–1 has reverted to Themistius' interpretation, and supported it by citing Stob. i. 1. 10, p. 20 (Dox. 97) ἔτι δὲ τῇ μονάδι τῶν ἐφεξῆς περισσῶν γνωμόνων περιτιθεμένων, ὁ γινόμενος αἰεὶ πετράγωνός ἐστι· τῶν δὲ ἀρτίων ὁμοίως περιτιθεμένων, ἑτερομήκεις καὶ ἄνισοι πάντες ἀποβαίνουσιν, ἴσον δὲ ἰσάκις οὐδείς‎.
Simplicius' various interpretations may be dismissed as obviously inadequate, and so may that of Zeller (i6. 455, n. 3), that καὶ χωρίς‎ means καὶ περιτιθεμένων τῶν ἀριθμῶν χωρίς τῶν γνωμόνων‎ (i.e. περιτιθεμένων τῶν ἀρτίων‎). The question we are left with is whether τῶν γνωμόνων‎ is limited to odd numbers, and χωρίς‎ means 'in the other case' (i.e. in the case in which even numbers are placed round the one), or τῶν γνωμόνων‎ includes even numbers as well as odd, and χωρίς‎ means 'when gnomons are placed one round another, without the odd'. I doubt whether καὶ χωρίς‎ can have the meaning assigned to it in the first interpretation. The second interpretation involves taking χωρίς‎ as meaning 'separately' or 'apart from the one', which is a rendering much easier to accept. The matter seems to me to be settled by a long passage in Iamblichus' well-informed In Nicomachi Arithm. Introd. (73. 15 ff. Pistelli), which turns entirely on the unity of shape preserved in series (1) and the diversity of shape produced in series (2). That this is a genuine presentation of an early Pythagorean doctrine is confirmed by the fact that the antithesis τετράγωνον, ἑτερόμηκες‎ occurs in the list of Pythagorean contraries in Met. 986a 22–6, for an ἀριθμὸς ἑτερομήκης‎ is precisely a number of the form n (n + 1) (Nicom. Ar. ii. 17. 1, 18 2; Theon Sm. 26. 21 Hiller; Iamb. In Nic. 74. 19 Pistelli).
The question remains whether γνώμονες‎ can be used to include even numbers as well as odd. The stricter meaning of the word is 'the figure which remains of a square when a smaller square is cut out of it'; and in this sense each successive gnomon stands for an odd number, since the difference between two consecutive square numbers is always an odd number. But in a wider sense γνώμων‎ can stand for any number which when added to a figurate number gives the next number of the same figure (Iamb. In Nic. 58. 19 Pistelli; Hero Deff. 58). Now, though the successive rectangles produced in fig. (2) differ in their proportions, they agree in being of the form n (n + 1), and it was therefore a natural extension of the meaning of the word to call their complements γνώμονες‎.
Cornford suggests that 'possibly putting gnomons round without the unit means putting two minimum gnomons round one another, thus